“Boys never really grow up, only their toys get bigger and more expensive as they age” – you can pretend to be a grown up but this fact will remain! Did you know that the gaming industry’s worth last year was $108.9 billion, with mobile contributing $46.1 billion of the total figure? The number is expected to reach $52.7 billion this year and $64.9 billion by the end of 2020, as shown in the figure below. Impressive, isn’t it? All thanks to Augmented Reality – the game changer! 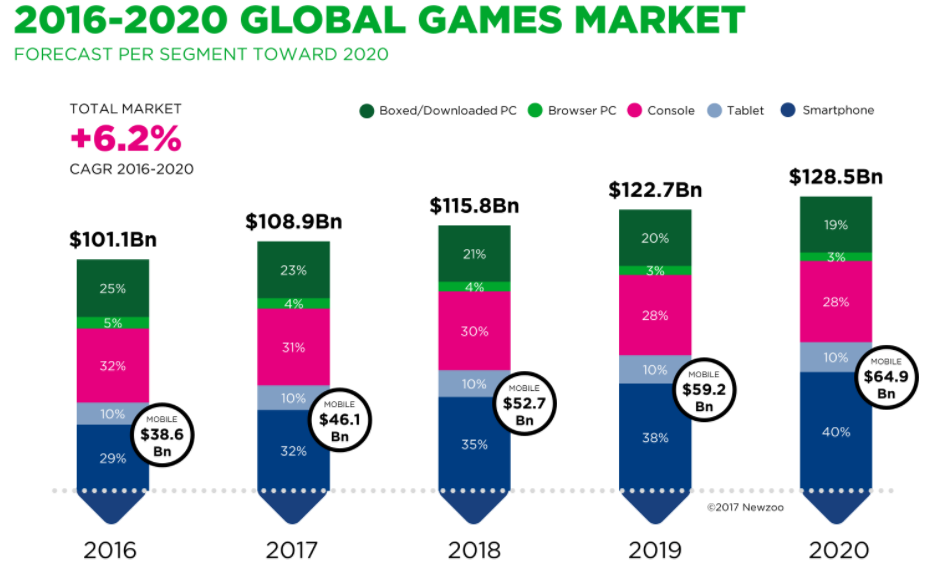 It goes without saying that augmented reality (AR) is the most talked about technology today. It has taken over the world of movies and gaming, and has proven to provide an unprecedented realistic virtual gaming experience. Augmented Reality, without doubt, is the next big thing in the gaming industry. It is capable of defining a new approach to engage gamers based on interaction between virtual objects and the real environment. There’s a prediction made by experts and analysts that AR will be worth a staggering $165 billion by 2024. Taking that into account, if you’re thinking of building a top-notch AR app for your business, then consider hiring a reliable Android & iOS app development company today.

While on one hand, there are apps to play archaic games, on the other, there is augmented reality bringing gaming to life. But AR sounds pretty expensive, isn’t it? What if I tell you that you can play the best augmented reality games for free? Don’t believe me?

Below are three of the best AR games (for iOS and Android) which you can play for free on your mobile.

If you’re a die-hard gamer, you probably have played the most famous, and arguably the best AR game of all time – Pokemon Go. If you don’t know about it, you must be from outer space. The game has been downloaded over 650 million times since it was released on July 6, 2016 as a joint venture by Niantic (the developer company of Pokemon Go) and Nintendo. It is a location-based AR game which maps the real world onto a virtual battlefield.

In this game, you need to run around to catch Pokemons and then train them adequately to fight epic battles with other players. The game went so viral that the servers kept crashing recurrently because of the sheer volume of traffic they were getting. If you saw Pokemon as a kid, just like I did, then this game is bound to bring back plenty of memories from your childhood, which will definitely put a smile on your face.

Similar to Pokemon Go, Ingress is another location-based AR game developed by Niantic (The Pokemon Company) with an insanely captivating storyline. The game was released exclusively for Android devices on November 15, 2012 and for iOS devices on July 14, 2014. It is a sci-fi style game where gamers have to travel around in order to capture energy from numerous portals and then claim them.

As a gamer, you can join any of the two available forces (typically known as factions) – “The Enlightened” or “The Resistance” and then play on behalf of these groups to capture the portals. Those in the Enlightened faction (represented by green color in the game) believe that Exotic Matther (XM) (a matter infiltrating the world) will help humanity evolve into a higher or better state. On the other hand, those in Resistance faction (identified in-game with blue color) are worried that XM will be used to control and enslave humans, and thus, needs to be stopped in order to prevent humanity from being destroyed by it.

The gameplay involves visiting various nearby popular monuments, parks, museums, and landmarks to capture “portals”, and raging “battles” with the opposition. You’ll get a number of items which would help you with your missions. Both the teams have to link all portals in a triangular format; the team which covers the largest distance wins the game.

Go ahead and download the game for iOS or Android!

Another highly popular and super-immersive AR based game is Zombie Gunship Revenant, in which you take control of a heavily-armed helicopter gunship and exterminate zombies from the sky while defending your base against them. The Developers, Limbic Software, have cleverly used atmospheric thermal camera visuals, bullet firing effects, authentic explosion animation, and superb sound effects which give you the feeling of a real battleground.

The game works flawlessly on both iOS (devices running on iOS 11 or later and supporting ARKit) and Android devices (running ARCore and supporting ARKit). The weapon arsenal includes Gatling Guns, Cannons, Rockets, Missiles, Sniper Rod and more. As you progress, you’ll be able to unlock new powerful munitions and upgrade them using resources you earn in battle.

These were the three best Augmented Reality games which you can play on your Android or iOS device without spending a single dime. Each of these games is designed to let you enjoy the most impressive features of AR technology through your smartphone. Feel free to share your experience with us about any of the above-mentioned games.

Do you have a unique app idea but not sure whether it will prove successful in the crowded mobile market? Come to us with your unbaked app ideas and we will bring them to life! We are a full-service software development company in Rancho Cucamonga that specializes in creating high-value web and mobile applications, using agile methodology and cutting-edge technologies. You can contact us on +1 (800) 559-5582 or drop us an email at info@rockonit.com.

Do you want more leads?